Commuting to Work In A Greener Dublin

Though it is a small city when compared with European counterparts,  Dublin ranks 6th on the list of the most congested cities in Europe, and 17th in the world. Motorists commuting in the Dublin area can expect to spend an average of eight days and 21 hours sitting in peak traffic a year, and studies done by NUI Galway have revealed that higher income levels among those employed in the greater Dublin area do not compensate for the cost of commuting.

Unfortunately, Ireland’s towns and cities are notorious for bad traffic and congestion. Cork and Limerick come in at 95th and 118th respectively. Having three Irish cities in the top 120 is unforgivable considering only a combined million and a half people live in the three cities.

In a post-pandemic Ireland, cycling infrastructure development is going to grow and grow. Public transport capacity has dropped to roughly 50 per cent and this is likely to be the norm for the foreseeable future. Under the Covid Mobility Programme, Dublin City Council and the National Transport Agency has identified 14 Dublin routes into the city with the highest levels of walking and cycling, which can be improved in order to ease the impact of a half-functioning public transport system.

Once implemented, the measures will better connect some of Dublin’s most expensive but also some more affordable urban villages and suburbs to the city centre. For house hunters that take to the saddle , the result could be a lower mortgage with a predictable commute time, far lower travel costs and guaranteed daily exercise.

A great article published recently by Joanne Hunt of the Irish Times encapsulates this new way of living.

“Take Crumlin in Dublin 12, the south city suburb is closer to town than much of the expensive and highly sought after neighbouring Dublin 6. The downhill cycle from Crumlin will get you to the city centre in 15 to 20 minutes, according to Dublin Cycling Campaign estimates. Under the Covid Mobility Programme, cycle lanes protected from traffic are to run both directions from Crumlin Road, through Cork Street, Kevin Street all the way to St Stephen’s Green. That should mean no more parked cars in the bike lane or handlebar clips from passing traffic. Cyclists seem to be already on to it.”

The increasing presence of bikes in Dublin City is plain to see: “The amount of people cycling to viewings is increasing,” says Ross Forde of David Ross estate agents in the area. “We had a viewing last Saturday and we had about six bikes outside the house. That’s unusual.”

In years to come it would be fulfilling to see Dublin exist as an example to other cities that cars are not the be all and end all of mobility, one can only hope that indications like those above will eventually eradicate an unsustainable transport network that is the Achilles heel of an otherwise progressive and modern city. 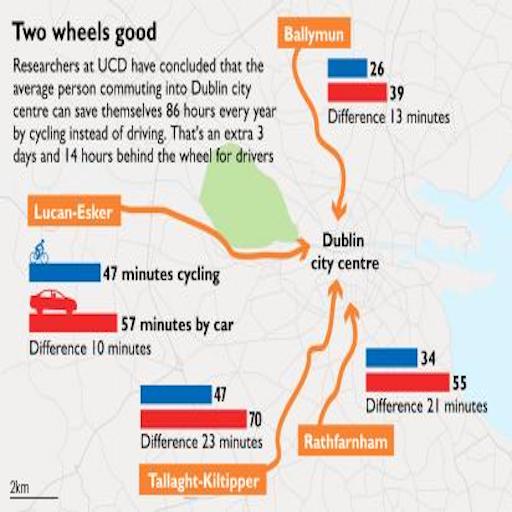 Time Saved by Cycling in Dublin

0
0
Your Cart
Your cart is emptyReturn to Tours
Continue