A Step in the Right Direction

Covid-19 has led to a cycling revolution throughout Ireland. Results from a study conducted by polling company Ipsos MRBI shows 510,000 people reported they were cycling, compared to 250,000 during the same period last year.

Dún Laoghaire-Rathdown County Council has taken note of this surge of cycling popularity and will install a temporary one-way traffic system with the space reallocated for the safety and benefit of pedestrians and cyclists, with work set to begin on the 8th of June 2020.

Council Spokesperson Oisin O’Connor said “The proposals we submitted included pedestrianising Blackrock and other villages, implementing a two-way cycle track from Blackrock to Sandycove and reducing the speed limits in all villages to 30kph. We need other communities, both residents and local traders, to support similar proposals.”

By Bike: The New Normal

With the much-welcome arrival of temperatures in the mid-twenties across the country, local bathing spots such as the Forty Foot in nearby Sandycove have seen an explosion of bathers, with many arriving by bike to enjoy the sea and the sunshine.

Reaction on social media to the ‘new normal’ of transport has been positive, one post encapsulated the mood: “Seapoint buzzing with people arriving on two wheels. If you build it, they will come by bike.”

Similar scenes were on show in Salthill, Galway. Debate over the misuse of public space has once again come to the fore in Salthill during the lockdown, with space being reclaimed by pedestrians and cyclists alike, to help ensure proper social distancing. 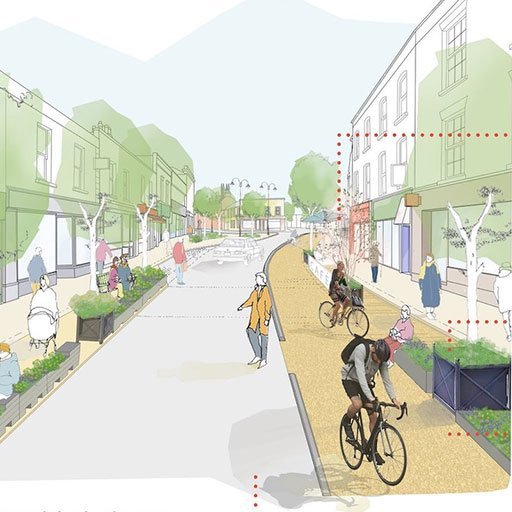